Discover the World and Art of Felice Hrovat 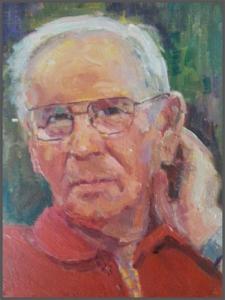 Felice Hrovat was born in Trieste, Italy. His passion for expressing himself through art, via paint, brushes and canvas started as a teen in his homeland. Then, in his early twenties, he found himself first in Montreal, Canada, and then later in Southern California. It was there, in California that he really worked to establish his skills while also working as an advertisement artist for over thirty years. Throughout the last fifty years he has been inspired to develop a uniquely distinct style and also approach, utilizing both oils and acrylics as his artistic mediums.

His dedication and talent has brought him a number of awards: the People’s Choice Awards, Best of Show Awards from the San Gabriel Art Association and multiple awards in the City of Norco Western Art Show and Sale. He has also done a significant amount of commercial work and commissioned works for private clients.

We feel proud to represent his work and strongly support his vibrant and unique embodiment of the skills, style, feeling and evocation of the classic California master painters. Please enjoy and consider bringing a work, or two, of this fine artist’s work into your home and life.

SEND US AN EMAIL HERE (RSVANDERMOLEN@AOL.COM)